There are human interest stories and movie dramas based around the idea, but there is also research to show us that human beings are incredibly resilient. Among the arguments supporting the need for an arts education, there is research supporting the use of music as a healing therapy for trauma. The arts contribute to a more complete human consciousness, and through preventative intervention, structured after-school music programs like HBV are ideal for building resilience and promoting mental health for at-risk youth. When building up resilience to certain trauma such as racial, political, or economic oppression, music is particularly well-suited for what art therapist Owen Paul Karcher calls “decolonization of the imagination” (Blacking, 1977; Figley and McCleary, 2017; Frazier and Hedemann, 2017; Karcher, 2017; and Van der Kolk, 2014).

It’s important to note that there is a difference between music therapy and music as therapy, and to be clear, I’m looking at HBV as music as therapy. The Boricua Youth Study explored the correlation between environmental factors and violence in Puerto Rican youth in the Bronx. They found that violence was more prevalent for kids when they had more risk factors (e.g. neglect, physical or sexual abuse, poverty, unemployed guardians, and direct or indirect exposure to violence) and on the contrary, the prevalence of violence was lower when there were more protective factors (e.g. academic achievement, lack of physical or sexual abuse, positive parent-child relationships, positive peer relationships, and positive school environment). As I read the study, I realized that HBV provides every single one of the listed positive protective factors for their students, including parental involvement (Bird, Canino, Gonzalez, Jennings, Maldonado-Molina, and Piquero, 2016).

Because students audition for HBV, parents are involved with the program from the beginning. I haven’t specifically interviewed any of the parents, but I have casually been with them at concerts. This program includes parental involvement by design. In my interview with Nikita, she told me:

“Sometimes I think about this when it’s concert time, like the parents sometimes think that this is just an after-school program, it’s kind of a daycare, like, ‘I can drop my kid off for 3 hours and then pick them up.’ But when it comes down to the concerts and those first-year parents hear their kid singing, and they’re like ‘oh, this is what my child is doing, they’re not just playing around, it’s not just This Little Light of Mine…it’s real music that they’re learning [in] different languages.’ And then the parents are like, ‘ok, this is something that I can get into, this is something I understand now, how can I help more? How can I support you more?’”

It is entirely possible that the students of HBV are particularly resilient because of the support of these positive protective factors, and the evidence may be their voices. As I originally began considering the possible effects of trauma on the voice, I had thought trauma may appear as a weight or heaviness in the voice. The kind of weight that you can hear in a simple “hello?” when a friend answers the phone after a hard day. However, that was incorrect. Similar to how our voices quiver when we feel nervous, anxiety caused by trauma appears as jitter in the voice (Carroll, Castano, Kidd, and Monti, 2017). Learning about traumatic jitter led me to ask: by learning to control and train their voices through breathing techniques and vocal exercises, are these kids counteracting the effect of trauma? In a future project, I’d like to ask the kids about how their bodies feel before, during, and after singing. To pose a follow up question: with the exchange that exists between the voice and its environment (Novak, 2015), is it possible that instead of the environment impacting the voice—in the case of HBV—the voice is actually impacting the environment? There are forthcoming studies looking at signals that the voice sends out, and mapping what micro-adjustments can be made to the voice to send out signals of confidence. These results will be illuminating as I continue studying the possible effects the voice has on its environment (Monti, 2017). HBV is respected as an institution in the community, which I had always attributed to the fact that it’s a positive place for kids. Is it instead possible that the kids’ controlled singing voices projecting confidence, are a sort of antidote to trauma and violence, and therefore impacting their environment? 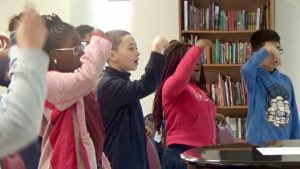 Each day observing at HBV, I left with more questions than I came with—a confirmation that this community deserves study. In addition to learning about HBV, understanding its merits as a program, and exploring the relationship between trauma and the voice; I began looking into additional ideas and theories in which to frame HBV. Appendix A discusses an audience’s perception of trauma in the voice, Appendix B gives examples of cumulative skill development, Appendix C addresses HBV’s performances in multiple languages within the context of a Culturally Responsive Pedagogy, and Appendix D presents the idea of kinesthetic intelligence and the relationship between music and movement. Finally, Appendix E proposes HBV as a case study in positive peace education within the human rights movement, and Appendix F is an annotated bibliography to inspire more research on peace education.

I am so grateful to Highbridge Voices. Mary, the staff, and all of the kids made me feel welcome from the moment I was first buzzed through the door. Everyone answered my many, many questions, allowed my microphone and video camera to be constantly rolling, and even let me join in singing a few times with the altos. This project has been a pleasure to work on, and I look forward to seeing where this connection and relationship leads for future research.